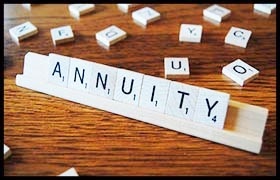 There are a lot of questions about annuities… So to help you better understand annuities we provided some annuity terms and jargon you will see or hear along with definitions.

Accumulation Value: The sum of principal plus interest earned, minus withdrawals.

Annuitant: A person who will receive annuity benefits and whose lifetime is used to measure the length of time periodic income payments are payable under an annuity contract.

Annuitization: The process in which an annuity is paid out according to the annuity option the policy owner has selected.

Beneficiary: The person(s) to whom the death benefit is paid in the event of the death of the annuitant or owner of an annuity contract.

Claimant: A person who submits a claim to an insurance company.

Cost Basis: A contract owner's initial investment in an annuity of after tax money, plus any additional funds invested in the same annuity at a later date. This applies to non-qualified annuities only.

Free-look Period: The period after the owner receives the annuity contract in which the contract can be cancelled and treated as void from the contract date.

Guaranteed Interest Rate: The percentage return that is stated by the company to be paid on funds in an annuity.

Guarantee Period: A period of time during which the company will credit a stated rate of interest. The guarantee is usually one year unless stated otherwise.

Index Cap Rate: The Index Cap Rate is the maximum annual percentage increase in the Index Value that can be credited to the annuity.

Joint Annuitant: A person who is one of two or more people who will receive annuity benefits.

Joint Owner: The person or other entity that enters into a joint contract of insurance with an insurer and actually jointly owns the insurance policy with another person or entity.

Non-Qualified Funds: Funds that have already been taxed. Non-qualified funds provide for the cost basis in the policy.

Owner: The person or entity to whom the contract is issued, who is entitled to exercise all rights and privileges under the contract.

Participation Rate: The percentage of index gain credited to the annuity.

Pre 59 1/2 withdrawals (IRS Rule 72t): Early distributions from your retirement plan that must be "substantially equal" payments based upon one of the three methods approved by the IRS. Once the distributions begin, they must continue for a period of five years or until you reach age 59 1/2, whichever is longest.

Premium Tax: A tax charged by certain states or any other governmental authority on either the premium payment or value of the Separate Account.

Premium: (sometimes referred to as Principal) The original amount of funds on which interest is calculated.

Probate: The legal process in which a court oversees the distribution of property left in a will. Annuities have the ability to avoid probate.

Qualified Funds: Funds that have not been taxed.

Security: A certificate that represents either ownership interest in a business (for example, a share of stock) or an obligation of indebtedness owed by an institution (for example, a bond).

Separate Account: In the United States, an investment account that is subject to risk based on market performance placed in variable insurance products such as variable annuities. The contract owner assumes all risk for funds invested in the separate account.

Subaccount: One of several alternative pools of investments within an insurer's separate or segregated account into which a variable contract owner may allocate premiums paid. Also known as variable investment account and variable subaccount.

Surrender Charge: An amount charged to an annuity contract owner when he prematurely withdraws a portion or all of the contract's accumulated value (over any penalty free amount). Also known as back-end load, contingent deferred sales load, and withdrawal charge.

Surrender Period: The period of time stated in the annuity contract during which a surrender charge will apply to any full or partial surrender that is in excess of the penalty free amount available.

Tax Deferred Basis: Accumulation of interest on which income taxes are not payable until money is withdrawn from the annuity

Mutual funds and exchange-traded funds are sold only by prospectus. Please consider the charges, risks, expenses and investment objectives carefully before investing. A prospectus containing this and other information about the investment company can be obtained from your financial professional. Read it carefully before you invest or send money.