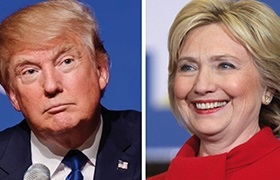 How will the Election Affect the Market and your Retirement Plan?

There will be lots of claims from presidential candidates between now and November 8th about how the U.S. economy would benefit if he or she wins the election. But which candidate is better for your Retirement Plan and financial future - Donald Trump or Hillary Clinton? What about Gary Johnson or Jill Stein? Lots of Americans could be asking these type of questions right now. Here’s some historical insight that might help.

Since 1833, the Dow Jones Industrial Average has gained an average of 10.4% in the year before a presidential election, and nearly an average of 6% in the election year. By contrast, the first and second years of a president’s term see average gains of 2.5% and 4.2%, respectively.

Recent years have been an exception to those averages. “Given that the past three years are so out of sync with the normal cycle, we’re not certain what 2016 will bring,” says Jim Stack, a market historian and Publisher of InvesTech Research. The current cycle is anything but average due to the Market crash in 2008 and the Dow going up 27% in the first year of President Obama’s second term. Then last year, which was supposed to be the strongest of the cycle, saw the Dow Industrials drop 2%.

Since 1928, the Standard & Poor's 500 has dropped an average of 2.8% in presidential election years without an incumbent seeking reelection, notes Stephen Suttmeier, Technical Research Analyst at BofA Merrill Lynch Global Research. Of the eight years in a two-term presidential cycle, the final year of the second term is the only one that has averaged negative market returns, Suttmeier says. By contrast, in years when the sitting president is up for reelection, the S&P 500 has averaged returns of 12.6%, he adds.

It will be interesting to watch what happens this year and see if the Market and the election results show a correlation. This election year is out of sync with other cycles so maybe it won’t.

In conclusion, most likely when it comes to the Stock Market - presidential elections make little difference in the long-term. “Focusing on which party wins the White House is unwarranted (at least from an investing standpoint)”, says Russ Koesterich, Chief Investment Strategist at BlackRock. Generally speaking, most investors can be prepared for whoever wins the election if they have a long-term perspective. Continuing to focus on your personal goals and your retirement plan is a good idea regardless of political cycles and elections every four years.

Mutual funds and exchange-traded funds are sold only by prospectus. Please consider the charges, risks, expenses and investment objectives carefully before investing. A prospectus containing this and other information about the investment company can be obtained from your financial professional. Read it carefully before you invest or send money.